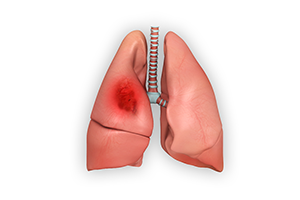 What is Lung Cancer?

Cancer is a disease that results from abnormal growth and division of cells that make up the body's tissues and organs.

Under normal circumstances, cells reproduce in an orderly fashion to replace old cells, maintain tissue health and repair injuries. However, when growth control is lost and cells divide too much and too fast, a cellular mass or 'tumor' is formed.

If the tumor is confined to a few cell layers and it does not invade surrounding tissues or organs, it is considered benign. By contrast, if the tumor spreads to surrounding tissues or organs, it is considered malignant, or cancerous. In order to grow further, cancer develops its own blood vessels and this process is called angiogenesis. When it first develops, a malignant tumor may be confined to its original site.

If cancerous cells are not treated, they may break away from the original tumor, travel and grow within other body parts. This process is known as metastasis.

Depending on how the cells look under a microscope, cancers that begin in the lung are divided into 2 major types:

Cigarette smoking is the major cause of lung cancer. Up to 90 percent of cases of the disease are caused by smoking, and one in 10 smokers will develop lung cancer. The longer a person has been smoking and the more packs of cigarettes smoked per day, the greater the risk. However, it is not known why one smoker develops lung cancer while another does not.
Research has also demonstrated the link between passive smoking and lung cancer.
Workers exposed to industrial substances such as asbestos, nickel, chromium compounds, arsenic, polycyclic hydrocarbons, and chloromethyl, have a significantly high risk of developing lung cancer.

Lung cancer is very difficult to detect at an early stage. Common symptoms include:

There are various treatment options available for lung cancer (with different aims), which include: surgery, chemotherapy, radiotherapy, and laser treatment.

Those non-small cell lung cancers which are amenable to surgery are those where the cancer is confined to a lump in the lung or to the draining lymph nodes immediately next to the lump, but where the lymph nodes in the center of the chest are involved, it is usually considered not suitable for surgery alone. Investigations include chest X-rays and CT scans. Surgery may involve removal of the lung or part of the lung. For those cancers that spread to the center of the chest, a combined treatment approach may involve chemotherapy with radiotherapy and surgery. Patients who present with widespread disease or later develop widespread non-small cell lung cancer may undergo chemotherapy which improves the chances of survival

Radiotherapy is used to alleviate the symptoms from primary cancer or other sites of disease, such as the bone.

Small cell lung cancer is primarily treated with chemotherapy. The best outcome is if the disease is confined to the chest, but chemotherapy is still used when the disease is widespread at presentation. Radiotherapy may be used to consolidate the local chest area or to prevent metastases occurring in the brain. Radiotherapy can also be used for palliation of painful localized areas, such as in the bone.